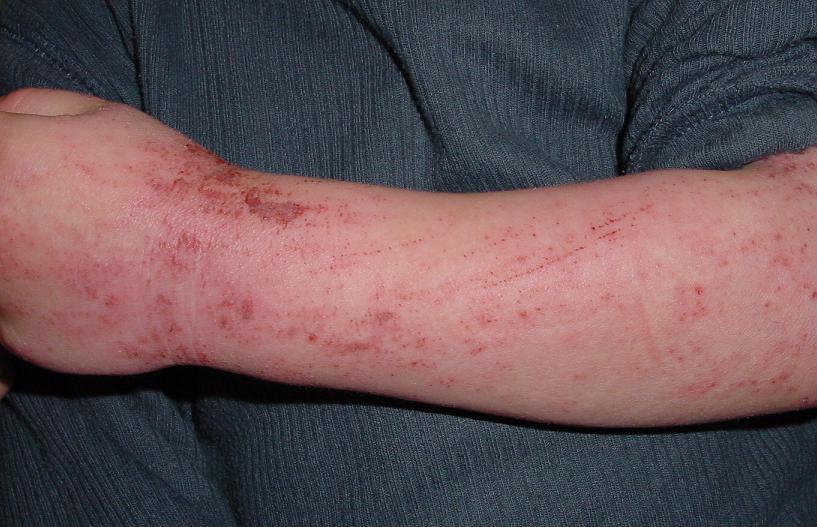 Neurodermatitis is a skin disease characterized by dry skin and agonizing itching. In the United States, the number of atopic dermatitis diseases is rising sharply for the past five decades. According to new studies, cannabis could relieve symptoms of the condition.

What exactly is Neurodermatitis?

The inflammatory but non-infectious skin disease neurodermatitis (atopic dermatitis) occurs in concurrent attacks. The disease is characterized by dehydrated and itchy skin. Neurodermatitis is one of the atopic diseases. These include diseases like hay fever and bronchial asthma. It means that an excessive immune response triggers the disease.

Atopic dermatitis patients are not only affected by the symptoms of the disease. The psyche also suffers. Although atopic eczema is not contagious, many shy away from contact with those affected, which is an additional burden. Atopic dermatitis often affects the scalp, face, and hands, so that those affected feel ashamed of their appearance. As a result, the self-esteem and quality of life of the patients suffer.

What does neurodermatitis stand for?

Neurodermatitis (atopic dermatitis) and its causes

To date, the exact causes of the inflammatory skin disease remain unexplained. However, everyone agrees that there is a genetic predisposition to skin disease. If one of the parents is ill, the child is at around 40 percent risk of developing neurodermatitis as well. Also, the risk of other atopic diseases, such as allergic asthma or hay fever, is increased in those affected.

What are the triggers of atopic dermatitis?

The immune system then overreacts to harmless stimuli, which creates an inflammatory reaction.

Thus, in atopic dermatitis, various trigger factors can contribute to triggering the disease.

In addition to the allergic reactions, there are other triggers such as psychological stress, sharp temperature fluctuations, textiles such as wool, or smoking tobacco. However, hormonal factors such as pregnancy or menstruation can also be triggers.

What types of neurodermatitis are there?

Around 80 percent of all those affected suffer from the extrinsic form of the disease. It means that the immune system reacts sensitively to allergens (e.g., pollen, house dust mites, or certain foods). In patients, the antibodies of the type immunoglobulin E (IgE) are then increased in the blood. These IgE stimulate the mast cells in the immune system to release inflammation-promoting substances. As a result, eczema develops on the skin.

Atopic dermatitis is not a food allergy. However, such an allergy can also occur with atopic eczema.

A much less common form of neurodermatitis is the intrinsic form. In these patients, the IgE level in the blood is not increased. The allergic symptoms do not play a significant role here. Also, patients do not show any increased susceptibility to allergic diseases.

What are the symptoms of eczema?

Atopic dermatitis symptoms can vary greatly in extent and always depend on the age of the person affected. In babies and affected children, atopic dermatitis usually begins on the face and scalp. Arms and legs can also be affected.

Also, in some cases, weeping eczema forms on the mouth. Flexion eczema, i.e., reddened and flaky areas of skin in the folds of the elbows, wrists, and hollows of the knees, are also typical. Dermatitis often resolves completely throughout puberty.

If the neurodermatitis disease persists beyond puberty, the symptoms in adults usually appear in the form of small itchy skin lumps, leather-like thickening of the facial skin, and severe itching. Affected areas of skin can be found on the flexors of the extremities, the back of the hands and feet, neck, eyes, and forehead area. Accompanying symptoms (atopic stigmata) can also occur. Typical symptoms here are:

How is it diagnosed?

Also, a secondary criterion should be met, such as an increased number of IgE antibodies in the blood, a positive allergy test, or light skin markings after chemical/mechanical stimuli.

For the diagnosis, it is also important to exclude other skin diseases (e.g., general contact eczema) that can cause similar symptoms.

A four-stage therapy plan is used for treatment:

In alternative medicine, there are different therapeutic measures, the effect of which has not been scientifically proven, but could be helpful according to experience reports. For example, homeopathic treatment or vitamin E therapy with argan oil would be possible. Some patients also report that treatment with tissue salts can help relieve dry skin.

A study also showed that taking vitamin D every day can alleviate the symptoms of the condition. Proper skin care is particularly crucial for atopic dermatitis.

What Helps Against Neurodermatitis?

In addition to medical treatment, skincare is one of the most important treatments for atopic dermatitis. A greasy ointment is suitable for dry skin. On the other hand, an oil-in-water emulsion with less fat is better if the skin is less dry or has sores. Urea creams can help keep the skin hydrated. However, these can cause a burning sensation in inflamed areas.

Cosmetic products that contain paraffin oil, petroleum jelly, emulsifiers, as well as preservatives, fragrances, and dyes should be avoided. It is just as important to avoid bathing or showering that is too hot.

Light therapies can be a way to treat symptoms of chronic skin diseases to relieve itching and improve the healing of skin symptoms. These therapies are mainly used for eczema diseases such as atopic eczema (neurodermatitis) and psoriasis. A distinction is made between photo brine therapy (balneophototherapy) and PUVA therapy. In the first-mentioned therapy, the patient first takes a salt bath. It is followed by treatment with UV light in a light cabin. The active plant ingredient psoralen is used in PUVA therapy. Then the dry and itchy skin is irradiated with UVA rays.

N-Palmitoylethanolamide also belongs to the class of endocannabinoids but is less well known. However, we now know that PEA has an endocannabinoid-like effect and is found in the skin. The cannabinoid receptors can also be found on the uncovered C nerve fibers of the skin. Here they are responsible, among other things, for the development and transmission of itching.

In the meantime, various studies have shown that the body’s own cannabinoid PEA can alleviate the symptoms of neurodermatitis. A study from 2008 examined the effect of PEA in cream on atopic dermatitis patients. A total of 2,456 subjects were interviewed. The symptoms of itching, skin redness, flaking, and thickening eczema had improved by around 60 percent. Also, 56 percent of the subjects stopped taking cortisone. In other test subjects, a weekly cortisone intake was reduced by an average of 62 percent.

The researchers at the University of Medicine in Poland, who also tested an endocannabinoid-containing cream on atopic dermatitis patients, also came to the conclusion that the study participants noticed a significant improvement in their symptoms and thus improved their quality of life.

One of the latest studies dates from 2017, which was carried out at the University Hospital. Here, too, it is proven that PEA has an itch-relieving and emollient property. After the test persons, who suffered from dry skin, were treated with a PEA-containing cream twice a day for two weeks, the complexion improved, and the itching decreased significantly.

Creams and lotions with PEA are now available in pharmacies and online shops as a natural alternative to ointments containing cortisone. When buying, however, you should ensure that the cream does not contain any chemical additives or perfumes, as these can have the opposite effect and put additional strain on the skin.

US researchers from the University of Colorado evaluated various studies on atopic dermatitis and cannabis in 2017. They concluded that the cannabinoids from the cannabis plant, such as THC and CBD (cannabidiol), could help in the treatment of itchy skin diseases like psoriasis or neurodermatitis.

In one of these studies, 21 subjects applied a cannabinoid-containing ointment twice a day for three weeks. Eight patients subsequently reported that the itching disappeared entirely. The researchers believe that the anti-inflammatory properties of the cannabinoids could be responsible. Also, another study that was viewed showed that high levels of THC could reduce inflammation and swelling in mice.

As early as 2007, researchers at the British University of Nottingham found out that cannabinoids such as THC and CBD from the cannabis plant could inhibit the production of keratinocytes. Keratinocytes are cells that are predominantly found in the epidermis. Studies from 2011 and 2013 were also able to show that the inhibition of keratinocyte production took place via the activation of the CB1 receptor.

How Can Atopic Dermatitis Patients Use CBD?

CBD can be used internally and externally. In addition to the prescription of finished medicinal products, prescription drugs (e.g., cannabis oil with THC) can also be prescribed. It is also possible to prescribe medicinal cannabis flowers. There are different types of cannabis to choose from, each with different levels of THC and CBD.

What is difficult, however, is that there are no valid and meaningful studies on the effects of medicinal cannabis on neurodermatitis. So far, the studies only give indications of a possible positive effect.

Various oils can help against inflammation and itching. They can moisturize the skin. In addition to olive and almond oil, hemp oils have also proven helpful. In particular, the polyunsaturated fatty acids (PUFAs for short) in it are said to have anti-inflammatory effects and relieve itching. In contrast, moisturizers with low PUFA content are usually not sufficient.

Hemp creams and ointments can also help against atopic dermatitis symptoms. When buying, however, make sure that these contain no chemical additives, only natural additives such as beeswax or aloe vera.

With chemical additives, there is a risk that the skin will dry out even further and cause further skin irritation.

Another alternative treatment method could be CBD oil. Over-the-counter and over-the-counter CBD oils have a THC content of less than 0.2 percent so that it does not develop any intoxicating effects. When used topically, the CBD oil can soothe and moisturize the skin. It also alleviates inflammation. In the meantime, CBD oils are also available, especially for the skin, which have then been enriched with skin-caring ingredients such as coconut oil or shea butter.