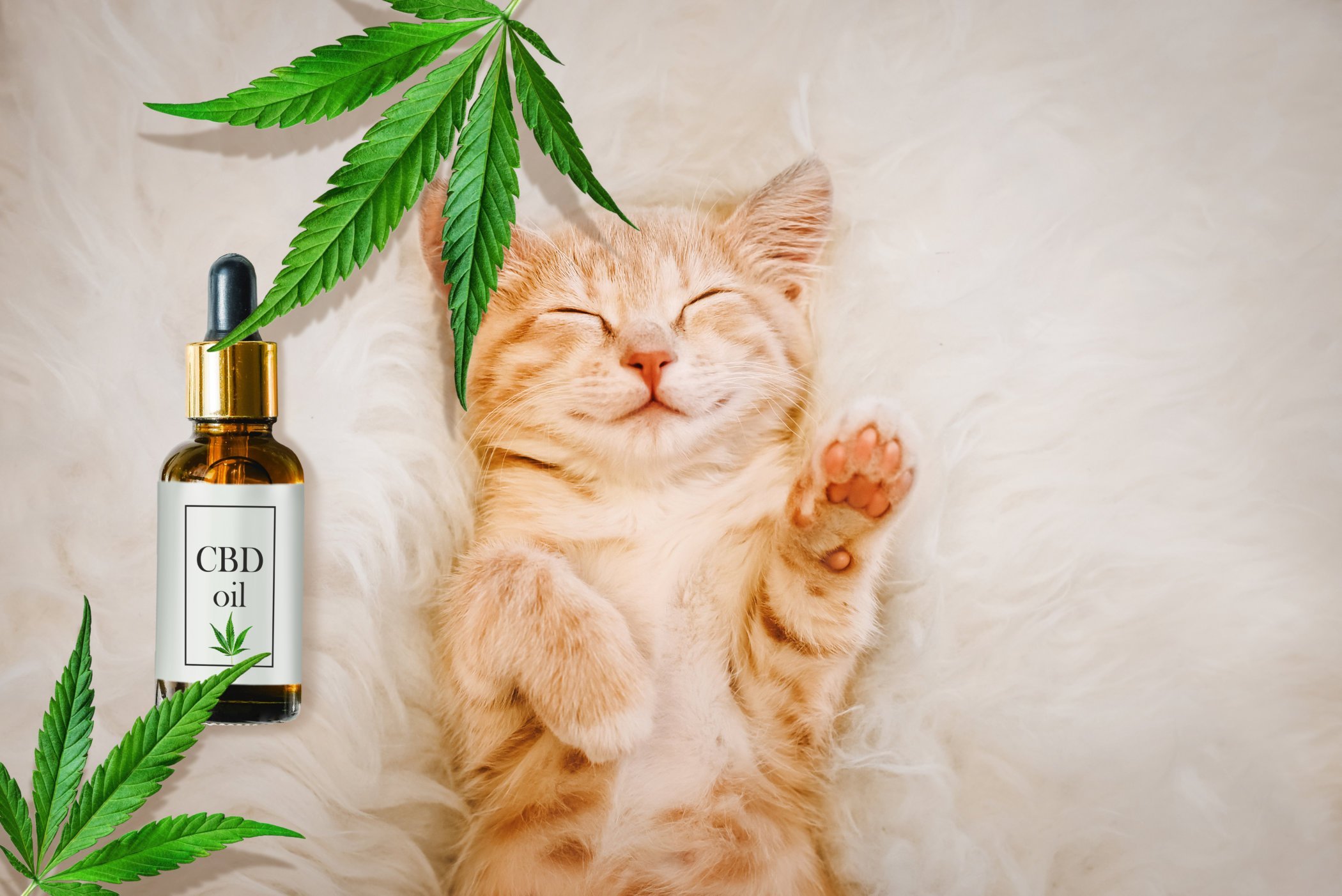 CBD oil for cats is also becoming increasingly popular among pet owners. No wonder, because the anti-inflammatory, relaxing and pain-relieving properties that CBD oil has can also have a positive effect on cats, according to experience reports. CBD oil for cats is particularly recommended for fear, pain and stress. Symptoms of cancer or arthritis are also said to be alleviated by cannabidiol (CBD). For cats, it is particularly important that a product without terpenes is used, otherwise digestive problems can occur. However, CBD oil doesn’t cause any addictions or an intoxicating effect.

CBD oil is traditionally used in humans. The hemp extracts interact with the body’s own endocannabinoid system (ECS). But not only humans, but also other mammals such as cats have the system, where the receptors CB1 and CB2 play a special role. These cannabinoid receptors can be found throughout the body. In addition to the digestive tract, nervous system, brain and organs, the skin and tissue also have CB1 and CB2 receptors.

CBD oil connects with the endocannabinoid system and positively influence the regulation of the cat’s body functions. By the way, cats can also make cannabinoids themselves. However, the self-produced amount is often insufficient.

Cannabidiol for cats: effects at a glance

The World Health Organization (WHO) has looked at the properties of CBD. According to this, the plant extracts should combine the following potential:

CBD for cats with pain and fear

CBD oil relieves not only physical but also psychological problems in cats. The following areas of application are particularly popular:

Arthritic symptoms can occur in cats just as in humans. CBD binds to the CB1 receptors in the brain and has a positive effect on inflammation. These receptors are supposed to activate the immune system and help eliminate inflammation. A study on dogs with arthritis has already provided indications of the potential effects of CBD.

Underlying illnesses, accidents, or surgery can cause cats to be in constant pain. Chronic pain conditions often require years of medication, which in turn can lead to side effects. CBD oil reduces pain transmission. Human studies have already worked out initial indications of the pain-relieving effects.

Animals can also suffer from pronounced anxiety, stress and depression. With cats, this is particularly evident from the fact that they often hide or appear very restless. CBD oil has a calming effect by targeting the responsible receptors in the body.

CBD oil for cats with cancer?

CBD is frequently recommended to cat owners if their darling has cancer. Scientific studies on cell lines and animals suggest that CBD has anti-cancer properties. Extracts from the hemp plant are said to both inhibit tumor growth and reduce tumor aggressiveness.

CBD has anti-inflammatory, pain relieving, and antioxidant properties that could help with cancer in cats. However, we cannot make promises of action or healing statements due to legal aspects.

CBD in cats: this is what owners must know

Cats have some specifics when it comes to CBD. Since they have a significantly faster metabolism, the effect of cannabidiol on you wears off faster compared to dogs. Studies have also found that conventional CBD oil can cause digestive problems and malaise in cats. Also, damage to liver and kidneys are the subject of discussion. It appears that cats do not have the enzymes necessary to break down the terpenes. Therefore, it is advised to prefer a CBD oil for cats that does not contain terpenes – so no full-spectrum CBD oil. In addition, high-quality product and manufacturing process should be there.

Experience reports are initially subjective impressions. Nevertheless, they give cat owners hope of a possible mode of action. In connection with CBD, animal lovers emphasize its pain-relieving properties. It is reported that CBD has helped cats with chronic back pain and arthritis.

It has been observed that the administration should also produce a calming effect. Occasionally there are statements that CBD oil should help with gum problems in house cats.

American researchers published a report in 2016 by presenting the results of a survey of pet owners. Two-thirds of the participants stated that the plant extracts appeared to have helped their animals with pain. A calming and anti-inflammatory effect has also been observed, according to pet owners.

How should I dose CBD oil for cats?

CBD oil should be dosed individually for both humans and animal companions. In other words, there is no uniform dosage recommendation. In cats, the symptoms of taking drops should be taken into account. Body weight also plays a role in the dosage. As a general rule, owners should first give their cats a low dose. If necessary and well tolerated, the dosage can be increased after a few days.

Some vets recommend a dose between 0.1-0.5 mg of CBD per kg of cat weight.

The following table can serve as a guide for pet owners.

CBD oil for cats: how to administer?

The potential effect of CBD oil can occur particularly quickly if we take the food supplement directly into the mouth. The valuable nutrients quickly get absorbed by the body through the mucous membrane. A dropper helps cat owners with the exact dosage of the CBD oil. The products do not always meet the taste of house cats. Then it can help to mix the drops with your favorite paste. By licking, the CBD oil also gets into the animal’s biological cycle.

CBD oil for cats – Side effects?

CBD oil is considered to be well tolerated. Nevertheless, there are a few mild side effects that you should know. Occasionally, animals react with drowsiness after ingesting CBD oil. Dry mucous membranes and dizziness can also occur.

Beware of pregnancy, loss of appetite and medication

There are speculations that cannabidiol can impair placental function. As a precaution, CBD oil should not be given to pregnant cats. CBD oil stimulates the appetite. However, pet owners should note that the opposite effects can also occur. So that the cat does not lose any further weight, you should closely monitor the eating behavior of your cat after taking CBD.

If your cat is on a regular medication, you should consult the vet. In particular, acid and anticoagulants as well as neuroleptics can lead to interactions when taken together.