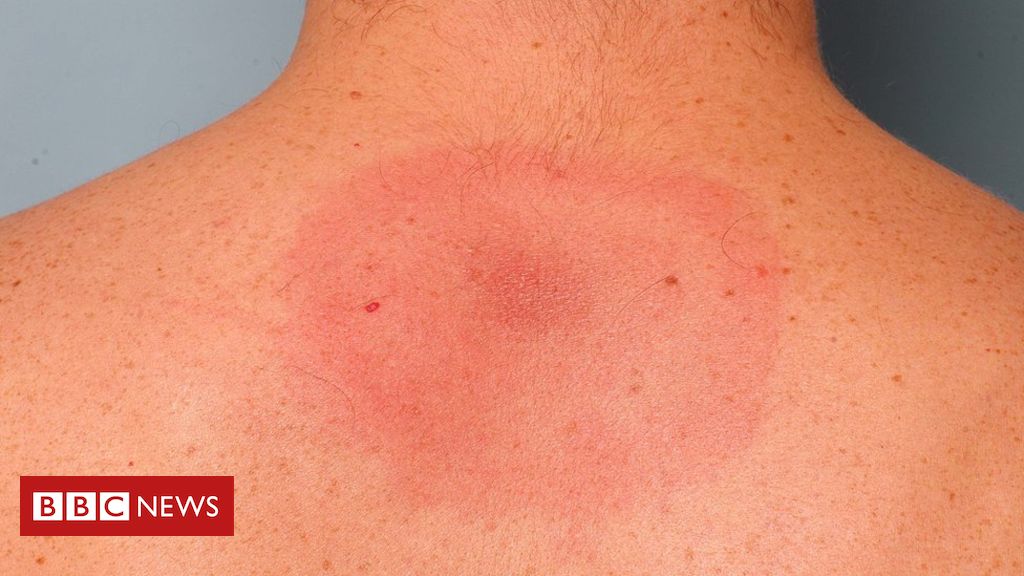 Can CBD help with Lyme disease? CBD probably cannot cure Lyme disease. However, it could alleviate the symptoms typical of the disease and make life easier for those affected.

Lyme disease is an extremely insidious bacterial infectious disease that is transmitted regularly by tick bites. Once the borreliosis bacteria have spread throughout the body, it is very difficult to get rid of them. The symptoms are sometimes severe, complex and can also appear chronically in the late stages.

My Insomnia Fix is a CBD knowledge center based in Minneapolis, MN. In this post, we look at what Lyme disease is, how it is transmitted and why CBD could (or should) be used therapeutically for Lyme disease.

Everything in brief: CBD for Lyme Disease

What is Lyme Disease?

The Lyme disease is an infectious disease caused by the bacterium Borrelia burgdorferi is triggered or related bacteria. These microbes infest in human cells and secrete toxins. This is how they cause tissue damage and inflammation in the body. If left untreated, the infection can cause multiple sclerosis, Parkinson’s disease, paralysis, chronic arthritis, myocarditis, fibromyalgia, lupus and other symptoms.

In the United States, an estimated 42,000 new patients were reported to have Lyme disease in 2017 alone. Every age group is potentially affected. According to a study, older people tend to get sick a little more often. The average age of the patients in this study was 57 years.

Borrelia, such as the B. Burgdorferi, are bacteria from the spirochete group. They are among the oldest living things on earth. So, although the disease has only been officially known for 30 years, researchers suspect that Lyme disease has been affecting people for a long time. The pathogens were also found in the Ötzi genome.

These microbes are accordingly clever and tough. They change their appearance at will, gather together in colonies and can easily withstand even high-dose antibiotic attacks, especially in the later course of the disease. A reliable vaccine does not yet exist. This makes the Borrelia a tricky and dangerous opponent.

How is Lyme disease transmitted?

In the US, the infection occurs regularly through a bite of a pin-sized tick. In rare cases, however, mosquitoes can transmit this bacterium. From around 8 degrees, these microbes become active and look for victims. Most cases occur in the summer months between June and August.

In nature, ticks can be found wherever their “hosts” also live, i.e. animals on which the ticks infect themselves with Borrelia (because ticks are not naturally infected). Hosts are usually small rodents, such as mice or birds. In the US, ticks are particularly common in deer and dogs.

According to our research, it is not possible to eliminate the risk of a tick bite fully in nature. Long pants and sleeves and sturdy shoes can at least reduce the risk. However, ticks survive long in clothes filed up to three days. They are easily a 60-degree wash cycle and the freezer. Chemical repellents for the skin (Icaridin or diethyl toluamide) can help. Incidentally, ticks can also be passed from pets to humans. That is why we should regularly screen free-running dogs or cats.

If you have been bitten by a tick, you shouldn’t panic. If an infectious tick bite is noticed, examined by a doctor and treated immediately, the chances of recovery are extremely good.

In addition, even after a proven tick bite, illness is still very unlikely since the majority of ticks are not infected with Borrelia. After a tick bite, infection only occurs in about 1.5 – 6% of the cases. An actual illness occurs in only 0.3 – 1.4% of the cases.

If you notice a tick bite, but you should immediately see a doctor. The fastest possible removal of the tick with as little manipulation is very important. During the first hours of the tick bite, infection risk is still low.

In about half of the cases, erythema migrans develops on the skin within about 3-30 days after the infection. This is often a target-like reddening around the puncture site, but it can also occur in atypical forms. You should leave the diagnosis to a doctor. The bite can itch or burn, but sometimes it is also symptom-free.

Redness is a clear sign of a reaction of the immune system to Borrelia. If you discover it, you should quickly go to the doctor. However, redness does not occur in all cases, which often overlooks the infection. Unfortunately, there is currently no reliable diagnostic test.

Antibodies in the blood serum also only develop after at least 4-6 weeks. Therefore, the diagnosis of Lyme disease is not based on a specific test, but on several points.

How do you recognize a borrelia infection? In addition to the blush, there are a number of symptoms that are typical of the early stages.

These are flu-like symptoms that everyone has experienced before. Therefore, Lyme disease is often not perceived as such or mistaken for fibromyalgia, especially if there is no redness. It is a dangerous mistake. Especially during the early stages, the infection can still be treated very well with antibiotics, such as doxycycline or amoxicillin. A sufficiently long and high-dose medically prescribed therapy is necessary.

If the pathogen was not banned at an early stage, the bacteria can spread (scatter) in the body. According to different sources, this phase occurs about 4-16 weeks or 20-59 days after the infection. At this stage, flu-like symptoms are more prevalent, particularly severe sweats.

In the spreading stage, the bacteria can affect organs, joints and muscles as well as the central and peripheral nervous system. Once this has happened, the treatment of Lyme disease can be particularly problematic. Symptoms at this stage can manifest themselves in various ways, including paralysis, heart problems, joint pain or impaired vision and touch. The immune system is often no longer able to cope with the infection at this stage. The microbes change, making it more difficult for the immune system to fight the intruders.

Doctors may also prescribe antibiotics regularly at this stage.

After several months in which the disease could progress untreated, some can severe and chronic symptoms develop. Some sources refer to this late stage also from an autoimmune disease. Here, sufferers can experience the disease for months or years free of symptoms until the disease becomes suddenly noticeable.

Studies have shown that Borrelia can gather together in this disease stage and form colonies of pathogens. The microbes can form a biofilm and prevent antibiotics from entering.

How to use CBD for Lyme disease?

To understand whether CBD is an option for Lyme disease, you have to understand the disease and understand how CBD works.

First of all, we did not find a reliable source in our research that recommends CBD as a complete alternative to medically prescribed therapy (regularly with antibiotics). So, you should always rely on your doctor. However, CBD very likely has its own antibiotic effects, especially with resistant bacteria, and can noticeably alleviate the symptoms of the disease.

There are already clear indications from scientific studies, especially for the therapy of bacterial infections, that speak for a supplementary treatment with CBD for Lyme disease.

CBD as a Supplement to Antibiotics

A 2008 study showed that cannabis had antibacterial effects and was even effective against an antibiotic-resistant strain of MRSA.

A new Australian study on rodents also found that CBD could be an effective antibiotic. CBD was able to kill all bacterial strains in various laboratory tests. It was interesting that even highly resistant strains of bacteria could be killed.

In this context, it should be noted that scientific research on CBD, THC and other cannabinoids is still in its infancy. The enormous potential in the pharmacological field is now hardly contested by any reputable medical doctor.

CBD has an Anti-Inflammatory and Analgesic Effect

How does CBD affect the body? CBD and other cannabinoids interact with the body’s endocannabinoid system, which is a part of the nervous system. This is distributed throughout our body, while receptors are mainly found in organs and brain. The main receptors are CB1 & CB2.

CB2 receptors are primarily located in the immune system. They can be found on the white blood cells as well as on the B cells (B lymphocytes), T cells (T lymphocytes) and macrophages. The immune system is a complex system made up of different organs, cell types and molecules.

It is now indisputable that CBD interacts with CB1 and CB2 receptors.

How CBD works for Lyme Disease

A specific theory of how CBD could provide relief from Lyme pain is presented by the American doctor Dr. Marty Ross. Dr. Ross has been treating medical cannabis patients since the late 1990s and has been fighting Lyme disease since 2004.

Dr. Ross argues that CBD can particularly help Lyme disease patients. It helps reduce diseases related anxiety that comes with chronic problems. The symptoms may include joint, muscle and nerve pain. There may be seizure related symptoms, muscle stiffness, tremors and muscle spasms. It can also reduce narcotic dependency for pain relief.

According to Dr. Ross, particularly the regulating effect of CBD on the CB2 receptors could be the reason why CBD could also be effective in Lyme disease:

Experience of CBD and cannabis in Lyme disease

In his practice, Dr. Ross notes that patients’ experiences with medical cannabis in Lyme disease can vary. However, he saw mostly positive reactions when CBD was used for nausea, tremors, anxiety, depression, and stiff muscles, among other things.

However, the best improvements he has observed were that pain control, the treatment of insomnia and seizure management.

We know that CBD regulates the CB1 and CB2 receptors throughout the body, making it effective against both neuropathic and inflammatory pain.

But it seems to have more subtle effects, such as the regulation of the serotonin system (via the 5-HT1A receptor), which also reduces anxiety related to chronic pain.

Early evidences from the US-based researchers suggest that cannabis and hemp products, such as CBD, are promising to relieve some of the Lyme disease symptoms. However, CBD is very likely not a cure for Lyme disease, even if CBD shows clear antibacterial effects.

However, the analgesic, anti-inflammatory and neuroprotective properties of CBD could make it extremely valuable as a complement to the conventional treatment of Lyme disease.

Cannabidiol or CBD from hemp extract has some really fascinating properties that could clearly be beneficial for Lyme disease. It is an efficient immune regulator that balances the immune system and helps it function better. CBD can reduce some of the effects of stress and anxiety. It has some pain-relieving properties and helps many people sleep. So far, almost no side effects are known. There’s no harm in giving it a try. However, if you want to try CBD oil in Minneapolis, MN, you should speak to your doctor before you complement it with other medication.