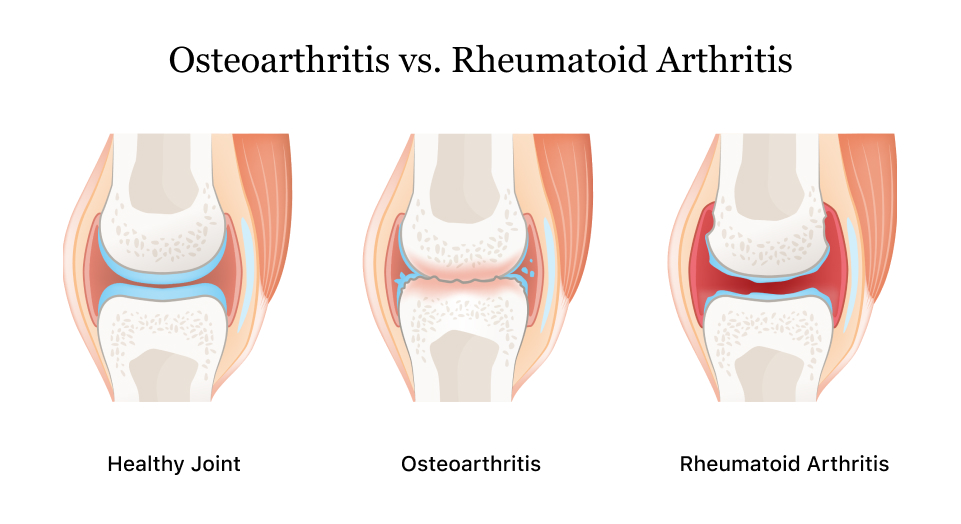 Rheumatism is a disease with many forms. Rheumatoid arthritis is the most common form of around 100 different rheumatic diseases. Although there are many therapy options, the everyday life of those affected is often severely restricted. Also, there are the intense side effects of rheumatism drugs. CBD oil for Rheumatism, on the other hand, could be an alternative with few side effects.

What basically is Rheumatism?

The term rheumatism covers over a hundred different diseases. This rheumatic group includes degenerative diseases, inflammatory rheumatic diseases (autoimmune-related), soft tissue rheumatism, chronic bone diseases (e.g., osteoporosis) and metabolic disorders that are associated with rheumatic symptoms. In some forms, not only the joints are affected, but also external organs such as the skin or the eyes or internal organs such as the heart, lungs, kidneys and the nervous system.

The most common form is osteoarthritis, which is a rheumatic disease caused by wear and tear. Inflammatory rheumatic diseases, on the other hand, include rheumatoid arthritis (chronic polyarthritis), ankylosing spondylitis (Bechterew’s disease), psoriatic arthritis, scleroderma and Sjogren’s syndrome.

Also, there are metabolic disorders in which rheumatic complaints occur. These include gout and endocrine joint diseases (e.g., hyperfunction of the parathyroid gland or hyperthyroidism. On the other hand, fibromyalgia is the most common form of soft tissue rheumatism. However, bursitis also falls into this group. Examples of chronic bone diseases are osteoporosis and osteomalacia.

Causes and Development of Rheumatic Diseases

Rheumatic diseases can have different causes. In the case of degenerative rheumatic diseases, the cause is to be found in an imbalance between the load-bearing capacity of a joint and an incorrect or excessive load. In contrast, the causes and triggers of inflammatory rheumatic diseases such as rheumatoid arthritis and soft tissue rheumatism have not yet been clarified.

It is assumed that genetic factors play a role and that the immune system reacts by producing antibodies against its own body.

If the connective tissue or the vessels are affected as part of rheumatic disease, as in rheumatoid arthritis, HLA receptors (docking points) are incorrectly formed on the cells of the body. These then serve as a hostile target for the immune system.

The cause of metabolic diseases is that either too little vitamin D and calcium (osteoporosis) or too much uric acid (gout) is produced, which leads to changes in the joints and bones.

What are the Symptoms of Rheumatism?

The main symptom of all diseases is a pain in the joints, muscles, ligaments and tendons. However, the symptoms vary depending on the type of disease. In the early stages of osteoarthritis, symptoms such as cracking/grinding noises when moving the joints, brief morning stiffness, and starting pain can appear. In the later stages, the affected joints become entirely stiff because the cartilage layer is then rubbed off.

Rheumatoid arthritis initially shows up in the form of mild joint pain in the morning, swollen joints, brief morning stiffness and a general feeling of illness, tiredness and exhaustion. In the later stages of rheumatoid arthritis, the small joints, in particular, are affected. It can lead to deformation of the fingers and feet. Larger joints are usually not affected.

A different picture emerges, however, with spondylosis. Symptoms such as stabbing/pulling pains in the cervical or lumbar spine area, paresthesia, muscle tension, muscle pain, symptoms of paralysis and restricted mobility appear here. In the later course of the disease, the upper body’s center of gravity shifts forward.

The diagnosis involves different measures, since the symptoms, the course of the disease and the appearance of the diseases are very different. Patients often first visit their family doctor, who first conducts a detailed anamnesis discussion. If there is then suspicion of rheumatic disease, a unique checklist is usually asked by the doctor. After a physical exam, the referral will be issued to a rheumatologist. Laboratory examinations and, if necessary, imaging procedures are also carried out to confirm the diagnosis.

Since diseases like arthritis are incurable, treatment aims to delay the disease processes and alleviate symptoms. An individually tailored therapy must be developed for each patient.

At the beginning of the rheumatic illness, patients receive non-steroidal anti-inflammatory drugs (NSAIDs), such as the pain relievers ibuprofen, acetylsalicylic acid or diclofenac for the severe pain. These have an analgesic and anti-inflammatory spectrum of activity.

Classic painkillers are used at the beginning. However, they also have undesirable effects. The main problem is that the drugs attack the gastrointestinal mucous membrane, and as a result, stomach ulcers can develop.

In the worst case, it can lead to a gastric perforation. It can also lead to dangerous water retention as the blood flow to the kidneys is reduced.

Newer drugs called COX2 inhibitors were developed only to block the pro-inflammatory enzyme COX-1. However, drugs such as rofecoxib, lumiracoxib and valdecoxib have been withdrawn from the market because of severe side effects and the increased risk of heart attack and stroke.

Cortisone is currently the most effective treatment for acute flare-ups. The cortisone effect usually sets in within a few hours. It is administered either in tablet form or with a syringe directly into the affected joint because the modern cortisone preparations can develop their spectrum of action selectively in a specific place. Older cortisone medications had the disadvantage that they worked throughout the body, which is why many patients had reservations about cortisone administration. Also, severe side effects occurred with long-term use, such as skin problems such as rashes or eczema, weight gain and osteoporosis.

How is the Essential Therapy Designed For Inflammatory Rheumatism?

Primary therapeutic agents include drugs such as sulfasalazine, methotrexate, leflunomide, or chloroquine, which inhibit inflammatory activity to a certain extent. These anti-inflammatory drugs only work after a few weeks and have a long-term effect. The problem with anti-inflammatory drugs is that they weaken the immune system. Therefore, infections can occur more frequently. For this reason, it is necessary to have close medical care by a doctor and to weigh up the risks.

Also, biologicals can be used as part of the therapy. It is a new type of drug group that is said to work faster than basic therapeutic agents. These are genetically engineered protein substances. These are supposed to switch off the inflammation-promoting messenger substances. However, there is also an increased risk of infection here. Since potentially dangerous long-term effects are not yet known, biologics are often only administered to patients when the other therapies have not achieved satisfactory results.

In the case of rheumatism, preventive interventions or operations to restore joint functions can be useful under certain circumstances. Preventive operations (synovectomy) are carried out in the initial stage in order to maintain the functions in joints and tendons by removing inflamed tissue. If, on the other hand, the joint function of affected people is severely damaged, joint replacement can improve joint function and reduce pain.

In both cases, there are surgical risks such as wound healing disorders and wound infection when patients take rheumatism medication. That is why such drugs are often discontinued before the operation.

Physical therapies can alleviate rheumatism symptoms. With the help of physiotherapy and occupational therapy, the muscles can be strengthened, and mobility improved.

Psychotherapy may also be indicated. In this, rheumatism patients learn to deal better with their illness and pain. Natural healing methods (e.g., acupuncture/acupressure or moxibustion) can also be a useful addition.

Also, nutrition plays a vital role in rheumatoid arthritis and all other forms of rheumatism. With the right diet (anti-inflammatory diet), the rheumatism symptoms can be alleviated. Various studies also confirm this. It has been shown that free radicals promote the destruction of the articular cartilage during the inflammatory attacks. It is therefore crucial that those affected take additional vital substances such as phytochemicals, vitamins, minerals and trace elements, as these are considered as radical scavengers. Vitamin D is also recommended to strengthen the immune system. According to current knowledge, many patients have severe vitamin D deficiency.

The intake of omega-3 fatty acids can also have a positive effect on inflammation and relieve pain. Here, for example, hemp oil can help, which can be used in many ways in the kitchen. In addition to the omega-3 and omega-6 fatty acids in a ratio of 3: 1, the CBD oil also contains the essential gamma-linolenic acids and the following ingredients:

Rheumatism: Medicinal cannabis can be an alternative treatment option.

Cannabis as Medicine: Supplement and Alternative to Conventional Therapies

More than 100 years ago, it was recognized that tinctures made from Indian hemp can relieve rheumatism symptoms. Today, various studies also show that the phytocannabinoids from the cannabis plant, such as delta-9-tetrahydrocannabinol (THC) and cannabidiol (CBD) can have a potential effect on inflammation and pain.

In research, the endocannabinoid system, with its CB1 and CB2 receptors, received more and more attention. It was because the cannabinoids from the cannabis plant bind to these receptors and develop their diverse range of effects. Researchers at the University of Nottingham explained that cannabis medicines activate cannabinoid receptors and have analgesic (pain-relieving) and anti-inflammatory effects. Preclinical and clinical studies have shown the therapeutic potential of CBD oil in diseases such as rheumatoid arthritis (chronic polyarthritis) or ankylosing spondylitis.

Phytocannabinoids from Hemp and their Anti-Inflammatory Properties

The cannabinoid cannabidiol from the hemp plant is continuously being researched as an anti-inflammatory and pain-relieving agent. As early as 2000, researchers at the Kennedy Institute of Rheumatology in London concluded after a study that the cannabinoid was a potential drug for inflammatory diseases. Researchers at the Arthritis Research UK Pain Center were able to demonstrate that CBD associates central sensitization and the pain reaction in osteoarthritis of the knee.

Also, a recent 2016 study conducted at the University of Kentucky showed that CBD use is for the relief of arthritis pain and joint inflammation.

The effects of CBD as a medicine for chronic pain have been very well researched. CBD has proven to be particularly helpful for neuropathic pain and pain that occurs as a result of multiple sclerosis. However, even with rheumatic complaints, i.e., inflammatory diseases, as well as pain that occurs as part of a fibromyalgia disease, there are now indications of its effectiveness.

In another study, Canadian researchers treated 40 subjects suffering from fibromyalgia with nabilone. It is a fully synthetic derivative of THC. The subjects then reported a decrease in fibromyalgia symptoms.

A current study from 2016, which was carried out at the University of Kentucky, also showed that topical CBD applications (cream) could have a positive effect on chronic pain and inflammation.

As already mentioned above, CBD oil contains essential omega-3 fatty acids, which can have a positive effect on inflammation. There are now CBD ointments in a wide variety of variants and with a wide variety of ingredients.

The CBD ointments should not only help against inflammation, such as joint inflammation or rheumatoid arthritis but also, for example, with a sprain or tense muscles. So far, there have been no studies on these over-the-counter ointments that prove their effectiveness. Nevertheless, those affected can try these ointments, as they usually do not harm their health. Nevertheless, the user should discuss it in advance with the doctor.